Raise your hand if you’ve ever been asked “What do you want to be when you grow up?” Now if you had to guess, how old would you say you were when you were asked this question? Three? Four? Five?  Sometimes I would like to think that we ask kids what they want to be when they grow up because as adults we are still trying to figure that out of ourselves…
I’m someone who’s had lots of different answers to the question “What do you want to be when you grow up?”.  When I was little I dreamt of being a sleuth , a writer, a princess, a mommy or, a combination of all of them.  I didn’t want to be a detective I wanted to solve mysteries, like “Nancy Drew” in my eight year old brain there was a HUGE  difference… I wanted to work off the grid and not with the “system” or so I had imagined.

When I was in high school I spent an awful summer working as a Chambermaid gaining a healthy respect for that side of the service industry.  I went to college taking Early Childhood Education and after graduation I worked in several Daycare settings before opening up a Private Day home in 2004 which is what I have been doing ever since.  Now, I’m looking for a change. Apparently wanting to change careers numerous times isn’t that uncommon with my generation…  I wonder, would anyone expect the charming house wife was a sleuth ready to crack the heist of the century? 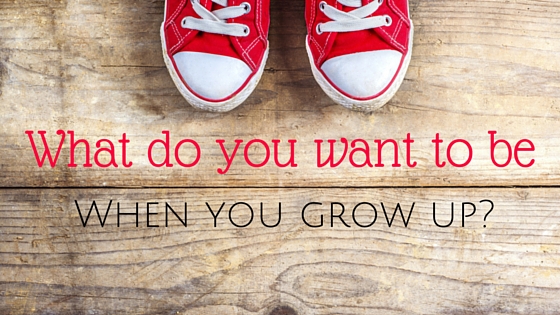 And because printables are super cute and a great way to record what their answers were ..

Click here for a cute printable to do with your little ones: 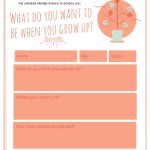 ( Printable courtesy of our friends over at The  Ladders)

I just want to leave you with this one thought…perhaps it’s because already in my short life I have worn many things and been many things.
Why does, “What do you want to be when you grow up?” always seem to mean, “What job or career do you want to have when you grow up?” maybe it’s not about the job? How about, I want to be a well adjusted, responsible, emotionally mature adult who builds strong relationships, is reliable and trustworthy and an overall positive individual that people like to be around? Maybe, I’d like to be an intellectual, reasonable, common-sense kind of chick? The point is there are a lot of things worth being “When you grow up” that don’t have anything to do with your job status.

« Thanksgiving: A roundup of our 15 favourite dishes
12 Easy Halloween Crafts for Kids »