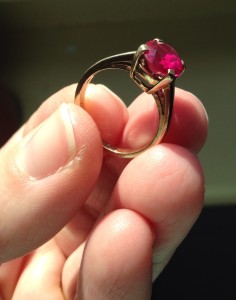 By nature I’ve never been a girly girl. The only form of jewelry I ever wore when I was in high school was a Mickey Mouse watch with the clock face turning towards me and blue seed bead necklace that I made myself.
When I got married I put away my watch, took off the necklace decided that the only jewelry I was actually going to wear was my diamond engagement ring and my wedding band.
Simple.
Like me.
A few years my husband and my eldest daughter purchased me a pandora bracelet that I wear only when we are going out.
The charms dig into my wrist so sleeping with it on is darn near impossible.
When my nana passed a few years ago and all her worldly possessions were divided between the family I was given this beautiful ring. 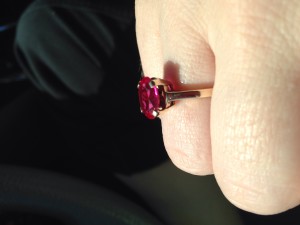 The ring was tucked into my jewelry box and it remained there for a number of years until my youngest accidentally knocked the box on the floor spilling the entire contents on the floor.
When I was cleaning up the mess I realized that not only had I forgotten the Ring was there but I knew nothing about this ring.
Nothing.
There is a story behind this ring.

Who gave it to her?
When did she get it?
Where was she living when this ring entered her possession?
Was this special to her?
Did she wear to a cocktail party?
Why don’t I remember seeing this ring when we were growing up?
I don’t remember seeing this ring in any family photos either.
Questions that I don’t have answers to. When I asked my mom she has absolutely no idea where this ring even came from.
So obviously I hit a dead end.
I might ask her sisters and see if they know the secret behind the ring.
I wonder if I will ever know the origins of this ring or if it will remain an unsolved mystery.

update
Since this post went up I have continued to dig a little deeper into this story.
What I have learned is a little confusing.
My mother who passed the ring onto me doesn’t recall ever seeing this ring.
Neither does my great Aunt. (though she did tell me that she thought it was beautiful)
I emailed my uncle and he thinks that my grandfather may have given it to my Nana or it might even have belonged to her mother,my great-grandmother.
When I took the ring the jewellery store I was told that it was a “synthetic Ruby” but if I wanted a more detail appraisal I would need to pay for an approval.
Which I didn’t have time for that day and to be honest I am not sure they have a gemologist on site who could tell me what stone actually is.
My uncle remembers it as being a “garnet”.
I’m not sure.
Color isn’t the best way to determine what a stone is.
So, I’m back at square one.
If my grandfather gave her this ring then it has to be at least 25 years old.
He passed away over 20 years ago and before then he suffered from alzheimer’s disease for years so I doubt he was busy buying rings.
There is also the possibility that this ring could have belonged to my great-grandmother
Now wouldn’t that be a hoot!
Only time will tell and perhaps I might have to see a gemeologist to get a clearer picture.

« “The smackin’ pan”
Sweater weather & the skunk next door »